What is a Lutheran

Tracing our core beliefs and practices back to the teachings of Martin Luther (1483-1546), Lutheranism is one of the oldest Protestant denominations.

Martin Luther was a German friar in the Augustinian order.  He became known as the "Father of the Reformation."  As a Bible scholar he believed strongly that all doctrine must be solidly based on Scripture. He rejected the idea that the teaching of the Pope carried the same weight as the Bible.

Though his initial intention was only to reform in the Roman Catholic Church, Rome held that the office of Pope had been established by Jesus Christ and that the Pope served as Christ's vicar, or representative, on earth. Therefore the church rejected any attempts to limit the role of the Pope or cardinals.

As Lutheranism evolved, some Roman Catholic customs were retained, such as the wearing of vestments, having an altar, and the use of candles and statues. However, Luther's major departures from Roman Catholic doctrine were based on the following beliefs:

Salvation by Grace through Faith 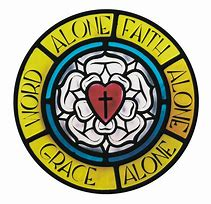 Luther maintained that salvation comes by grace through faith alone, not by works and sacraments. This key doctrine of justification represents the major difference between Lutheranism and Catholicism. Luther held that works such as fasting, pilgrimages, novenas, indulgences, and masses of special intention play no part in salvation.

Luther believed that salvation is available to all humans through the redeeming work of Christ.

Luther believed each individual has the right to reach God through Scripture with a responsibility to God alone. It is not necessary for a priest to mediate. This "priesthood of all believers" was a radical change from Catholic doctrine.

Luther believed the Scriptures contained the one necessary guide to truth. In the Lutheran Church, much emphasis is placed on hearing the Word of God. The church teaches that the Bible does not merely contain the Word of God, but every word of it is inspired or "God-breathed." The Holy Spirit is the author of the Bible.

Luther wrote two catechisms.  The Small Catechism contains basic explanations of the Ten Commandments, Apostles' Creed, the Lord's Prayer, baptism, confession, communion, and a list of prayers and table of duties. (Copies are available free on the Kiosk in our Commons (entry way)).  The Large Catechism goes into great detail on these topics.

Luther retained that baptism was necessary for spiritual regeneration, though no specific form was stipulated.  Today Lutherans practice both infant baptism and baptism of believing adults.  Baptism is done by sprinkling or pouring water rather than immersion.  Most Lutheran branches accept a valid baptism of other Christian denominations when a person converts, making re-baptism unnecessary.

Luther retained the sacrament of the Lord's Supper, which is the central act of worship in the Lutheran denomination, but the doctrine of transubstantiation was rejected.  While Lutherans believe in the true presence of Jesus Christ in the elements of bread and wine, the church is not specific in how or when that act occurs.  Thus, Lutherans resist the idea that the bread and wine are mere symbols.

Luther maintained that individual churches should be governed locally, not by a centralized authority, as in the Roman Catholic Church. Although many Lutheran branches still have bishops, they do not exercise the same type of control over congregations.

Lutherans do not interpret the Rapture as most other Protestant denominations do. Instead, Lutherans believe Christ will return only once, visibly, and will catch up all Christians together with the dead in Christ. The tribulation is the normal suffering all Christians endure until that last day.

Lutherans see heaven and hell as literal places. Heaven is a realm where believers enjoy God forever, free from sin, death, and evil. Hell is a place of punishment where the soul is eternally separated from God.

Lutherans reject the Catholic doctrine of purgatory, a place of cleansing where believers go after death, before entering heaven. The Lutheran Church teaches that there is no scriptural support for it and that the dead go directly to either heaven or hell.